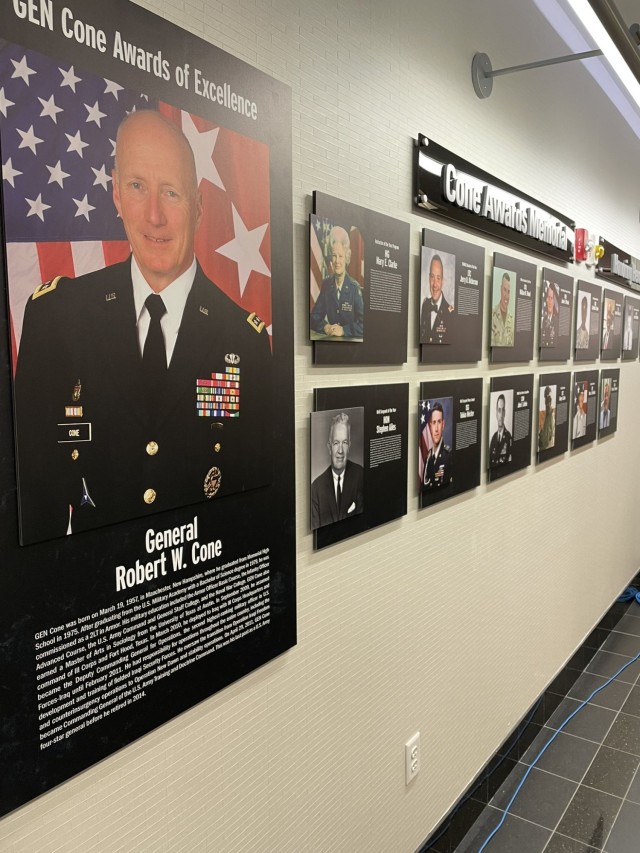 JOINT BASE LANGLEY-EUSTIS, Va. – A year ago Gen. Paul E. Funk, II, commanding general, U.S. Army Training and Doctrine Command, had a vision to create a program that encapsulated each of the “Best of TRADOC” competitions. On May 24 that vision became a reality as TRADOC announced the Gen. Robert W. Cone Awards of Excellence Program and unveiled its commemorative wall.

Annually across the Army, the Army National Guard, and the Army Reserve seven competitions are held, including the Instructor of the Year, Drill Sergeant of the Year, Career Counselor of the Year, Best Warrior, Noncommissioned Officer of the Year, and the Soldier of the Year. Through this program, the winners will have their photos displayed on the Awards of Excellence Wall, located within the TRADOC headquarters building.

The dedication of the awards program and commemorative wall not only honors the former commanding general, but each individual award is also dedicated to a Soldier or civilian who exemplified the award.

“For his name to be on this Awards of Excellence Program, along with the pictures of Soldiers who are the very best at what they do, is something that makes me proud,” said Jill Cone, the late general’s wife.

At the center of the Awards of Excellence Program is Gen. Robert Cone, the 14th commanding general of TRADOC. Funk said he, “inspired an entire generation of Soldiers to serve” and that he more than deserved such a tribute.

He has also been honored previously with the Cone Heritage Center at Fort Irwin, Calif. and the Cone Memorial Room at the Thayer Hotel in West Point, N.Y.. The dedication of the award program points to the lasting legacy he has had on TRADOC and on the Army as a whole, according to Funk.

Referencing Brian’s Song, Funk said, “I loved Bob Cone and I want all of you to love him, too.”

Those who spoke of him at the event made it clear that caring for Soldiers was at the center of his mission. Both Funk and Jill Cone shared with the audience his mantra, “leadership is a privilege.” She also shared that he understood people were entrusting their sons and daughters with his care and he took that role seriously.

“He led by example, always going the extra mile to ensure that his Soldiers were the best trained and cared for, even when it required long hours at work,” she said.

That dedication to Soldiers continues to impact the Army today. He served when the Army was transitioning from an Army of execution to an Army of preparation. He restructured the leadership development program, accelerated digital learning, improved expeditionary maneuver, and helped develop the strategic land power concept and multi-domain battle. He was influential in the study of urban warfare in mega cities, helped in the formation of regionally aligned forces, and studied the interaction between social media and information technology. As TRADOC commanding general, he finished Doctrine 2015, which was a complete doctrinal overview that helped prepare an adaptive Army to fight conventional and unconventional future wars.

Funk used the words of Gen. Martin Dempsey, another former TRADOC commanding general, to characterize Cone, “When you look at Bob’s career, you can’t help but notice a common thread. He truly is a superb warrior, an accomplished scholar, and a leader of consequence.”