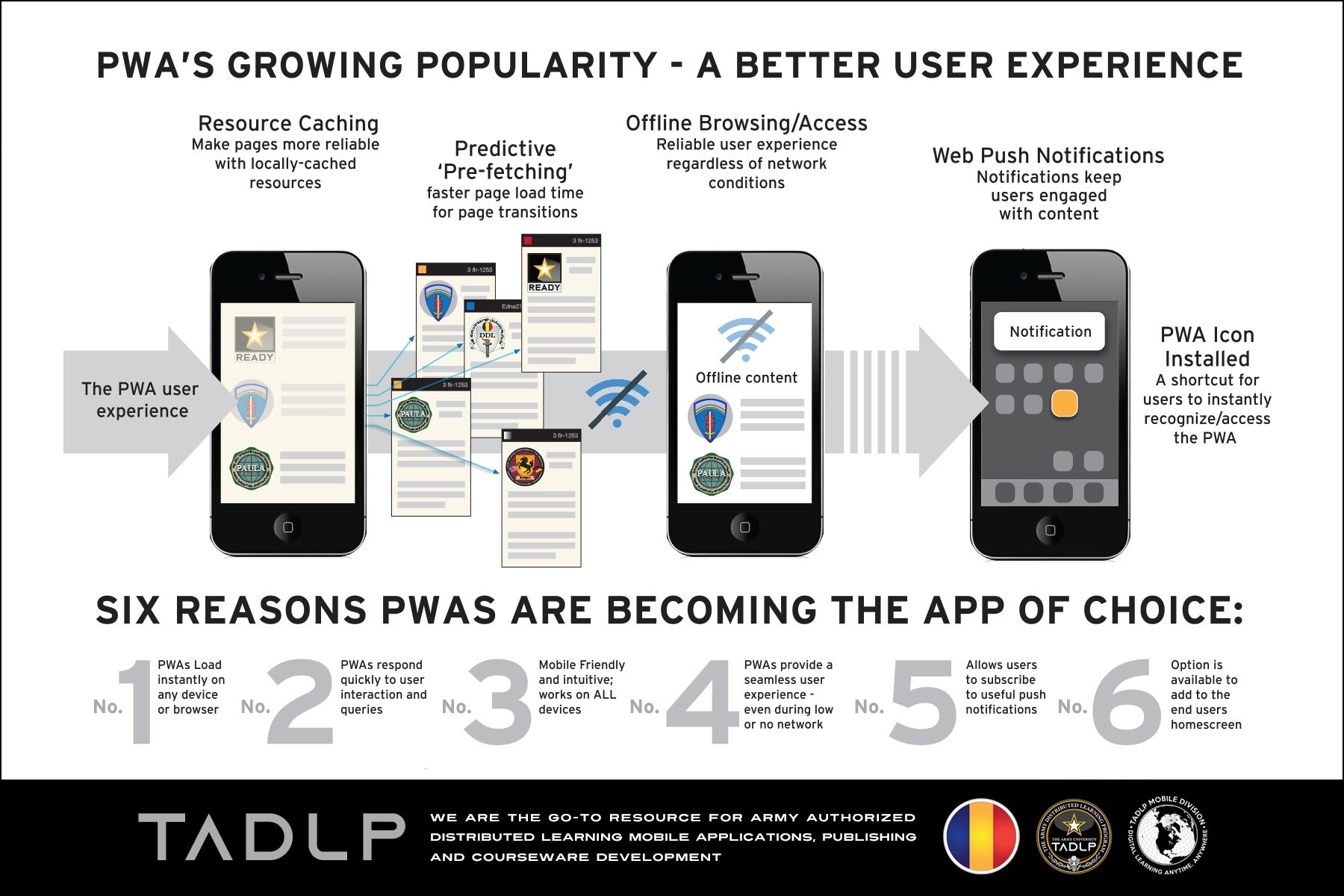 FORT EUSTIS, Virginia –Although not understood by the public in the same way that conventional web applications (apps) are, the most commonly used apps that boomed as an integral part of the smartphone user-experience, Progressive Web Applications, (better known as PWAs) are far superior to their fore-runners.

A Progressive Web App is a website that looks and behaves like a native app. Often, users only notice they are using a PWA when they experience the prompt to ‘add to home-screen or that the content is still accessible even when there is no network connection available.

PWAs are discoverable in a search engine such as Google, can be linked to, and are easy to install/. One of the features that is most appreciated is that once installed, PWAs are completely network independent and are much faster than traditional apps.

A well designed PWA is visually identical to any app on a home screen, and responds to a smartphone view screen. Users are able to tap to open the app in the same way. But the similarity really ends there and PWAs have greater advantages to a user that really sets them apart.

THE ADVANTAGES OF PWAs

A PWA is vastly more discoverable online and readily available in a browser’s search engine than a conventional app. Once found and installed, it’s easily launched from any home screen, desktop or app menu. When the end user launches a a legacy browser such as Internet Explorer to access the same content, the PWA easily reverts to a website.

A PWA costs significantly less to build and maintain. Each progressive web app has a one “central-code-base” that works on a variety of mobile devices, and because there’s only one codebase, making updates and adding new features takes less time.

The TADLP Mobile Division developed it’s first Army Doctrine Audiobook, “ADP 6-22, Army Leadership and the Profession” as a Progressive Web Application in 2020 and all subsequent releases of the popular audiobook series are PWAs and offer these benefits to the Soldier end user.

According to a study conducted by Twitter in 2019, subscribers found the Twitter PWA to be on average 15 times faster to load and install on mobile devices, compared to its native app. Twitter discovered a whopping 75 percent increase in user tweets sent and a 7 percent reduction in data use. Many of Twitters users are converting to it’s PWA every month, and the number continues to grow in 2021.

Established by the Chief of Staff of the Army in 1996, the Commanding General of Training and Doctrine Command (TRADOC) was appointed the Executive Agent for TADLP and is the full-line authority for the centralized management and integration of the program. Located at Fort Eustis in Virginia, the TADLP Director is Ms. Helen Remily. The Army Distributed Learning Program (TADLP), improves Army readiness by providing relevant, and tailored distributed training and education to Soldiers, leaders, and Army civilians from a responsive and accessible – frequently mobile – delivery capability. Distributed Learning (DL) is a proven instructional model used by the Army to deliver individual, collective and self developmental training and education anytime, anywhere. TADLP leads the way in creating user-friendly, pliant and adaptable distributed and distance learning models that leverage emerging technologies to distribute learning across an array of portable devices in a variety of formats depending on the needs of the user. To learn more about the people and facilities of TADLP visit their website at https://tadlp.tradoc.army.mil/

ABOUT THE U.S. ARMY TRAINING AND DOCTRINE COMMAND (TRADOC)

The U.S. Army Training and Doctrine Command (TRADOC) was created on July 1st, 1973. For nearly half a century TRADOC has fundamentally transformed the U.S. Army into the best trained, best equipped, best led, and best organized modern land power in the world today. TRADOC shapes Army forces through four primary functions: Recruitment and Training, Leadership Development, Doctrine and Integrating Capabilities. Headquartered at Fort Eustis, in eastern Virginia, TRADOC executes its mission through five subordinate commands and centers, U.S. Army Center of Military History, The U.S. Army Combined Arms Center (located at Fort Leavenworth, Kansas), The U.S. Army Center for Initial Military Training and the U.S. Army Recruiting Command (located at Fort Knox, Kentucky). The command has a global perspective and oversees 32 Army schools organized under eight Centers of Excellence, each focused on a separate area of expertise within the Army (i.e. Maneuver and Signal). TRADOC trains more than 500,000 Soldiers and service members each year. To learn more about the U.S. Army Training and Doctrine Command visit their website at https://www.tradoc.army.mil/