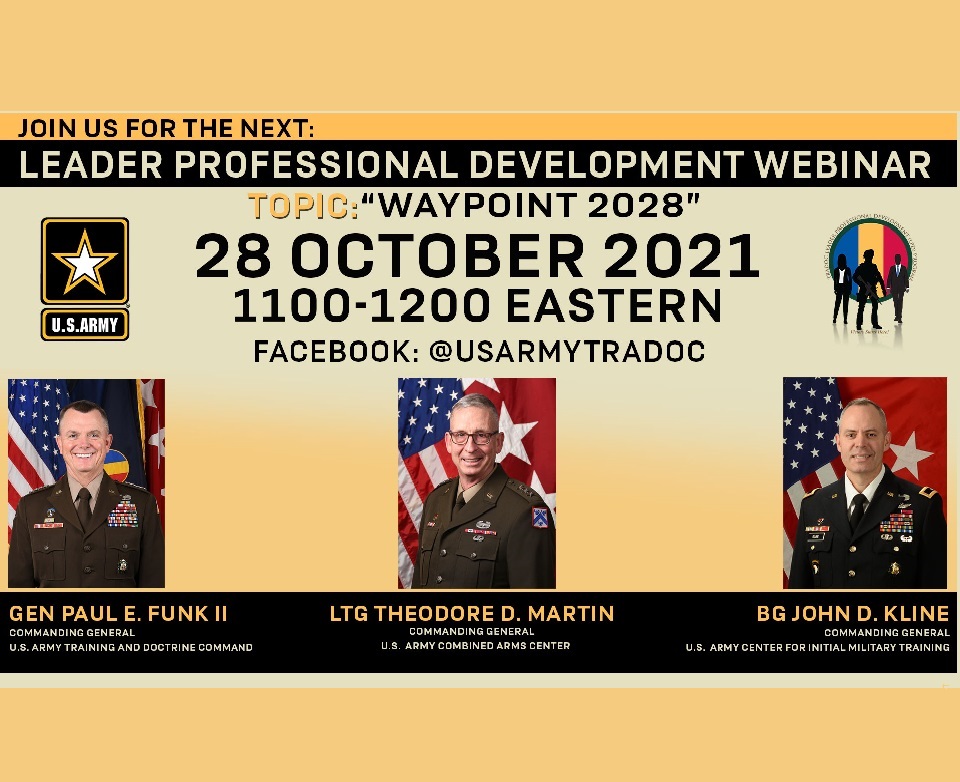 JOINT BASE LANGLEY-EUSTIS, Va. – Multi-domain operations capable force is the Army’s central focus for readiness. How the U.S. Army Training and Doctrine Command contributes to creating a MDO-capable Army by 2028 will be the topic of discussion for the next Leader Professional Development webinar airing at 11 a.m. Oct. 28.

TRADOC’s LPD program helps to educate the workforce on the Army Profession through topics such as WayPoint 2028. As a CAC-led undertaking, WayPoint 2028, is a point at which the Army will comprehensively reassess its assumptions about future warfare and adjust its investments accordingly.

“This LPD will help the TRADOC military and civilian workforce understand the role TRADOC has in designing the Army of 2028, and why this is a critical waypoint to meeting the Army’s goal of a Multi-domain Operations-ready force by 2035,” Martin said.

As the Army sets its conditions for 2028, CAC has identified four observations that the Army must address to meet its end state:

“To prepare our Soldiers to win in an MDO environment, we’re going to update our doctrine and provide leader development and training opportunities to educate the force on these changes,” Martin said. “We’re going to provide the most realistic MDO training and support at home stations, Combat Training Centers and during Warfighter exercises to meet our goals.”

Through CAC review findings, Soldier readiness has been identified as a critical focus to prepare the Army to win in great power competition and conflict. The leaders featured in the LPD will share the importance of training adjustments to generate MDO-capable forces.

“Early integration between TRADOC and Army Futures Command will ensure requirements for modernizing doctrine, facilities, and leader development are nested,” Martin said. “This integration is the key to the overall success of our modernization efforts. The reason we call it WayPoint is that it can be adjusted as we learn, year by year, while always keeping sight of the AimPoint.”

To view the LPD and submit questions for the panelists to answer live, visit either TRADOC’s Watch Livestream or Facebook page.