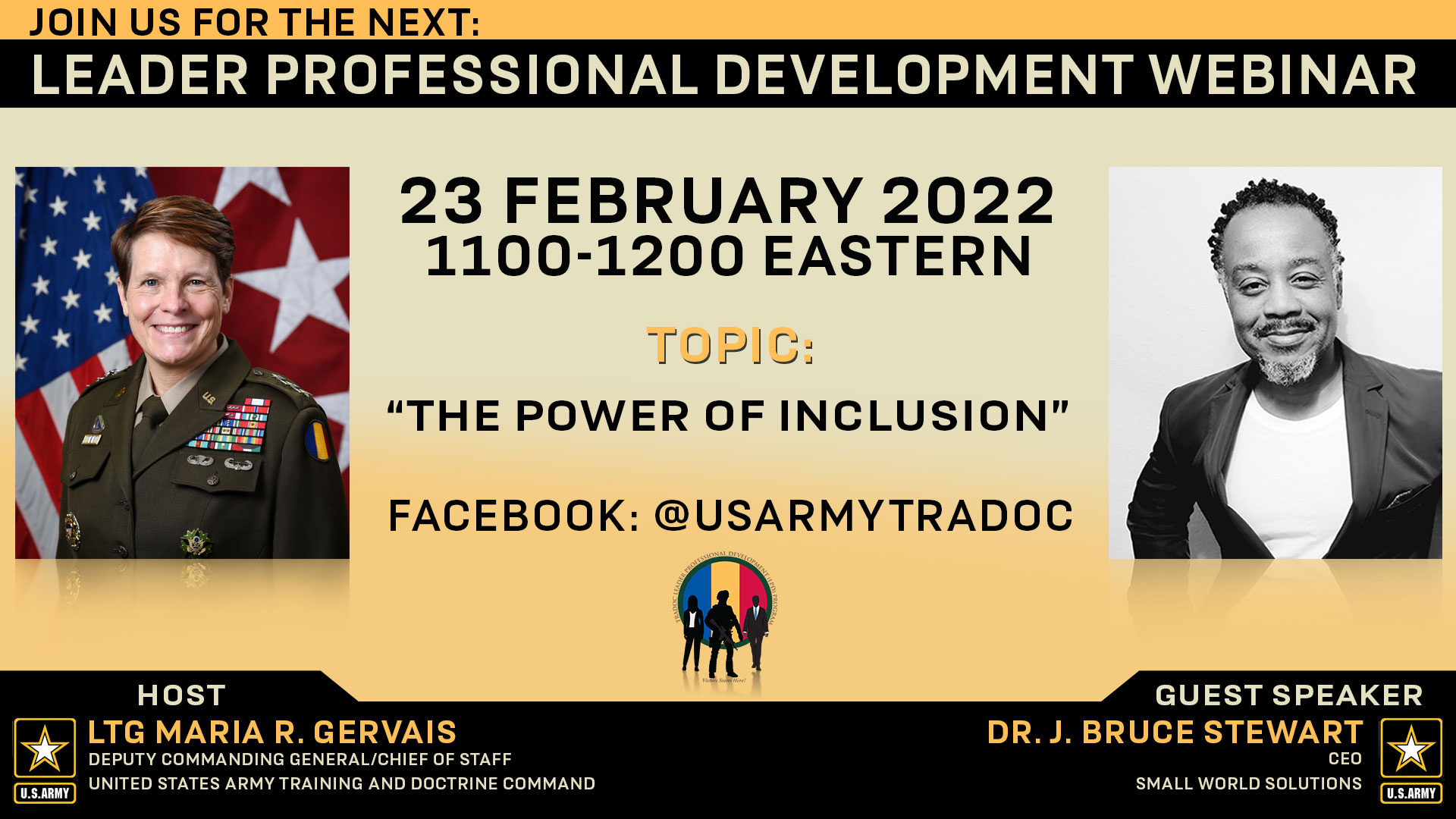 JOINT BASE LANGLEY-EUSTIS, Va – The U.S. Army Training and Doctrine Command will host a Leader Professional Development webinar on the power of inclusion on Feb. 23, 2022.

Stewart will share what he has learned over the course of his involvement in various leadership and diversity initiatives, including his position as Air National Guard Director of Cultural Diversity Transformation.

One key lesson Stewart took with him from his experience was that racism and sexism were not always to blame for the racial, ethnic, and gender disparities that exist in society. He claims the innate cognitive biases of human beings influence behavior.

“From my experience, disparities can exist in large part due to our fundamental nature as social animals,” Stewart said. “It’s been well documented that, as human beings, we are creatures of habit and make most decisions highly influenced by our unconscious mind.”

A focus topic to be discussed during the LPD is how to consciously work on breaking down innate biases and form habits that foster a more inclusive environment.

How do we determine which behaviors need improvement? Stewart has created a new way of assessing where a company stands in regards to diversity and inclusion called the New Inclusion Quotient, or New IQ, that has now been adopted government-wide.

“When I assumed the role as the deputy director for Diversity and Inclusion during the Obama Administration, I quickly realized that the only measure of diversity and inclusion that existed within the federal government at that time was measuring demographics,” Stewart said. “To fully measure the impact of diversity, a meaningful measure of inclusion was required.”

The New IQ is an inclusive intelligence assessment that consists of 20 questions, or behaviors, grouped into five Habits of Inclusion: Fair, Open, Cooperative, Supportive, and Empowering.

“These behaviors can be learned, practiced, and developed into habits of inclusiveness and subsequently improve the inclusive intelligence of organizational members,” Stewart explained.

Based on the results of the assessment, the New IQ can provide useful information to organization leaders on how to improve their workplace inclusivity and diversity. In the upcoming LPD, Stewart will further explain the process behind utilizing the results of the New IQ.

When it comes to creating a more inclusive workplace environment in TRADOC and other Army organizations, Stewart advises to first apply the inclusion rule.

“The inclusion rule is to create a culture where all Soldiers feel a sense of belonging and are valued for the unique skills and perspectives they bring to the team. To do this, leaders need to model the five inclusive habits” he said.

This concept is similar to the Army People Strategy and changing the Army culture. The APS states that in the 21st century, the question for leaders is not whether culture should change, but how it should change, and that we must “amplify the positive behaviors that align with our vision of cohesive teams: civility and positive relationships; diversity, equity and inclusion; honor and respect; empathy; and care for Soldier and Civilian well-being.”

If there is one lesson Stewart would like the audience to take from the upcoming LPD discussion it is “effective leaders in the 21st century lead from the inside out, not the top down.”

“Effective leaders focus on connecting, not commanding,” he said. “They don’t view their Soldiers in just terms of human capital but more importantly in terms of building social capital. They realize leaders are only as effective as their teams and teams succeed through effective teamwork, and inclusion is the engine of effective teamwork.”

To view and participate in the LPD discussion, visit TRADOC’s Facebook page, DVIDs, or the TRADOC watch page at www.tradoc.army.mil/watch/ where you can submit questions to be answered throughout the session by LPD panelists.