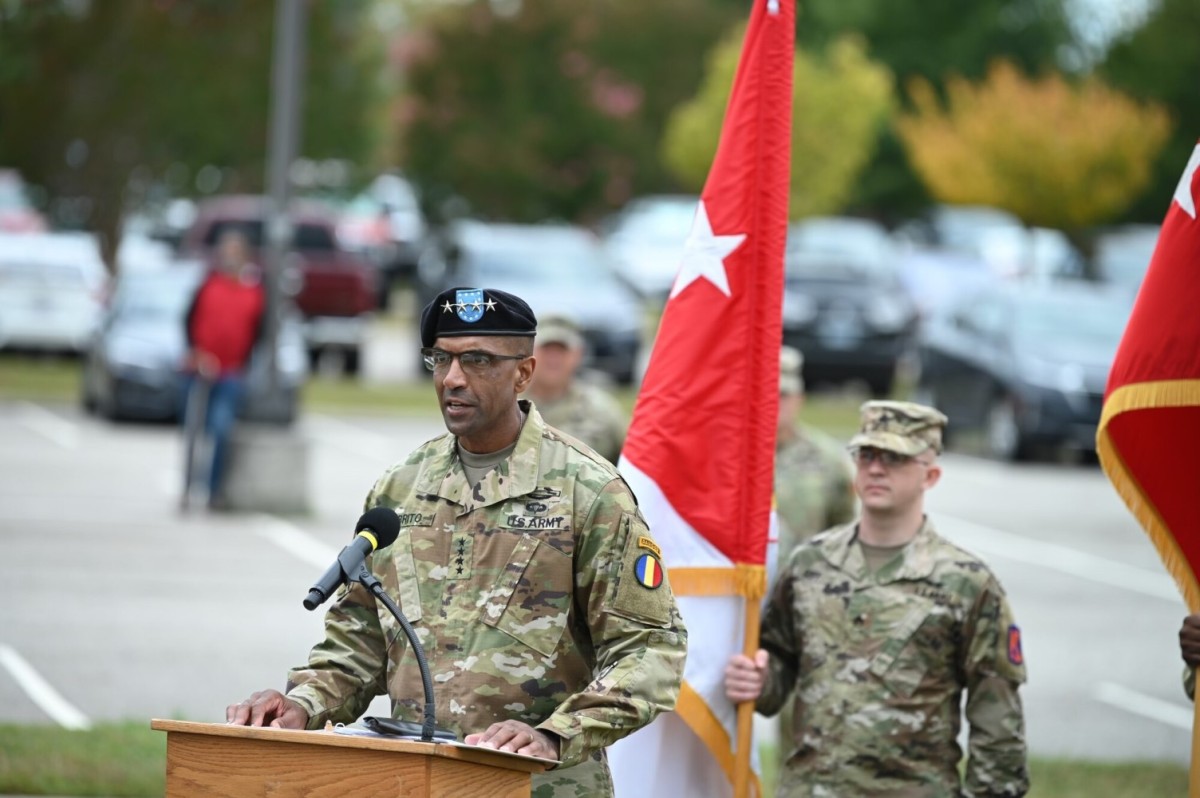 U.S. Army Chief of Staff, Gen. James C. McConville, presiding officer for the ceremony, stated today was “an especially great day at TRADOC.” During the ceremony, the achievements of the command under the leadership of Funk were celebrated and Brito was officially welcomed as the 18th commanding general of TRADOC.

“What this command has done over the last few years is truly remarkable. It wasn’t too long ago that the Army had to adjust its training to a new, dangerous environment, and through it all TRADOC never stopped,” McConville said.

According to McConville, Funk’s leadership, with the help of the TRADOC team, enabled the Army to create innovative solutions throughout the COVID pandemic to continue training and recruiting Soldiers who are ready to fight and win the nation’s wars. This team also helped accelerate and operationalize Army initiatives including the Army People Strategy, Multi-Domain Operations and the Army Combat Fitness Test.

“Funk has done an extraordinary job for the Army here at TRADOC,” McConville said. “He was the leader our Army needed; a leader who understood that you don’t have to choose between taking care of people and keeping our Army strong and ready to protect the nation and its allies.”

In welcoming the incoming commanding general, McConville said the command is very lucky to have Brito, as he carries the qualities of confidence, commitment, great character and the utmost care for people.

“I have complete trust and confidence that TRADOC is in good hands with Brito. He is the right person at the right time to lead this organization. I know that he will continue to take care of our people,” he said.

Commissioned as an infantry officer through ROTC upon graduation from Penn State University, Brito has led and commanded Soldiers at every echelon, from platoon to corps and combined joint task force.

He is now making history as the first African American TRADOC commanding general, though this is not his first time assigned to TRADOC.

Brito previously served as the commanding general at the Maneuver Center of Excellence and Fort Benning from 2018 to 2020, before serving as the U.S. Army’s 49th deputy chief of staff, G-1.

“I am extremely humbled and honored to be joining this great team of Soldiers and civilians,” Brito said as he took the podium for his first remarks as TRADOC’s commanding general. “TRADOC’s efforts are essential and foundational to ensuring our Army remains the most lethal fighting force in the world, and I promise you to stay committed to the very end.”