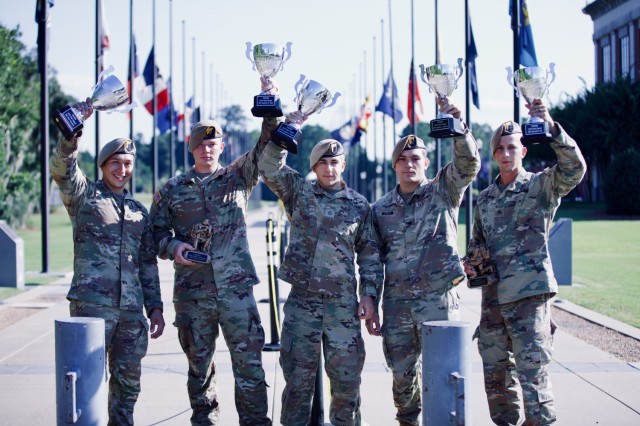 JOINT BASE LANGLEY-EUSTIS, Va. – Soldiers from the 6th Ranger Training Battalion, Maneuver Center of Excellence, won the U.S. Army Training and Doctrine Command’s 2022 inaugural Best Squad Competition, held Sept. 11-16, at Fort Benning, Georgia. The winning squad will move on to compete against other teams for the title of the U.S. Army’s Best Squad.

The competition, spanning over 96 hours, tested each competitor individually and as a squad. The events focused on various physical, mental, technical, and tactical skill sets, including multiple foot marches, warrior tasks and battle drills, marksmanship, obstacle courses, and a review board-style interview in front of TRADOC senior leaders.

“You’re always concerned when you’re going to do something new,” said TRADOC’s Command Sgt. Maj. Daniel T. Hendrex. “We’ve done the best noncommissioned officer, the best warrior, and the best Soldier competition in the past. This time when talking with competitors, it was a different feel. And it was unique in many ways.”

As the Army continues to transition to modernizing and training for large-scale combat operations in a multi-domain environment, Sgt. Maj. of the Army Michael Grinston announced the Army’s intention of hosting a squad-focused competition, which better aligns with Multi-Domain Operations specific tasks.

Hendrex also said, “Nobody goes to war alone. You’ll realize that you will do amazing things for those individuals to your left or right because you care about them and, more importantly, you don’t want to let them down.”

The winner of the Army level competition will be announced during the Association of the U.S. Army’s 2022 Annual Meeting and Exposition in October.