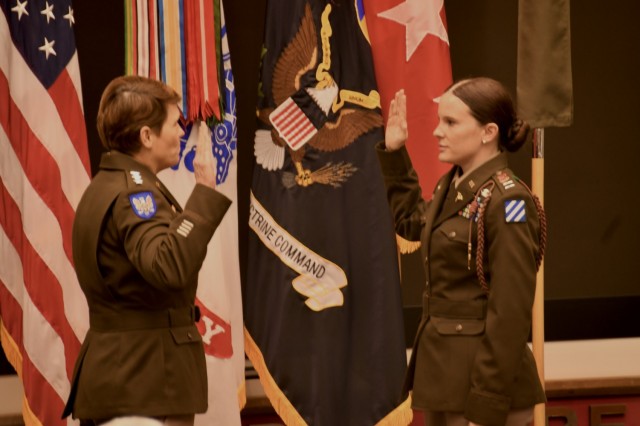 FORT EUSTIS, Va. — A third star was not the only thing added to newly promoted Lt. Gen. Maria Gervais’ shoulders during her promotion ceremony June 20, 2021.

Gervais was also welcomed to the U.S Army Training and Doctrine Command as the first woman to lead as the deputy commanding general and chief of staff.

“We are making history here today,” Funk stated. “Maria Gervais did not get here by accident; she is what we talk about when we talk about who is managing our great Army!”

This is not her first time serving at TRADOC. Gervais is what Funk described as a “four-time repeat offender at TRADOC.”

“Although I have previously served with the TRADOC family, this is my first time as a member of the Joint Base Langley Eustis and the Hampton Roads community. I will soon start exploring this beautiful and historic region; continuing to foster the strong relationships that have been built before me,” She said.

Gervais’ was surrounded by family at her promotion ceremony with some able to attend in person while others joined virtually.

She knows many others could have received this position, but is honored for this opportunity and glad she can continue to wear her uniform and serve the nation.

During the ceremony, Gervais talked about how she joined ROTC and when the day came where she was issued her uniform and was able to take it home. She hung it up in the main room and patiently waited for her mom to return home.

“My mom immediately cried when she saw the uniform, and not another word passed between us that day,” Gervais said.

Ten years later, she finally gained the courage to ask her mom why she cried that day. Her mother responded, “I knew that when you joined the Army you were going to have endless opportunities and that you would be taken care of.”

“My mom was right. You have an Army family and I am here because of each and every one of you. This represents you and I can’t thank you enough for that,” Gervais said, pointing to her new 3-star rank.

TRADOC continues to focus on people and driving cultural change in order to build America’s Army that is ready to win on the battlefield. “As the previous Synthetic Training Environment Cross-Functional Director, I understand the importance of providing Soldiers with the opportunity and equipment to defend our nation. I am humbled to have been given the responsibilities entrusted to me,” She said.

Gervais was commissioned in 1987 from the Lander College Reserve Officer Training Corps. Program in Greenwood, South Carolina as a distinguished military graduate, and was assigned to the Chemical Branch. She has received a vast number of awards and decorations including a Bronze Star Medal.