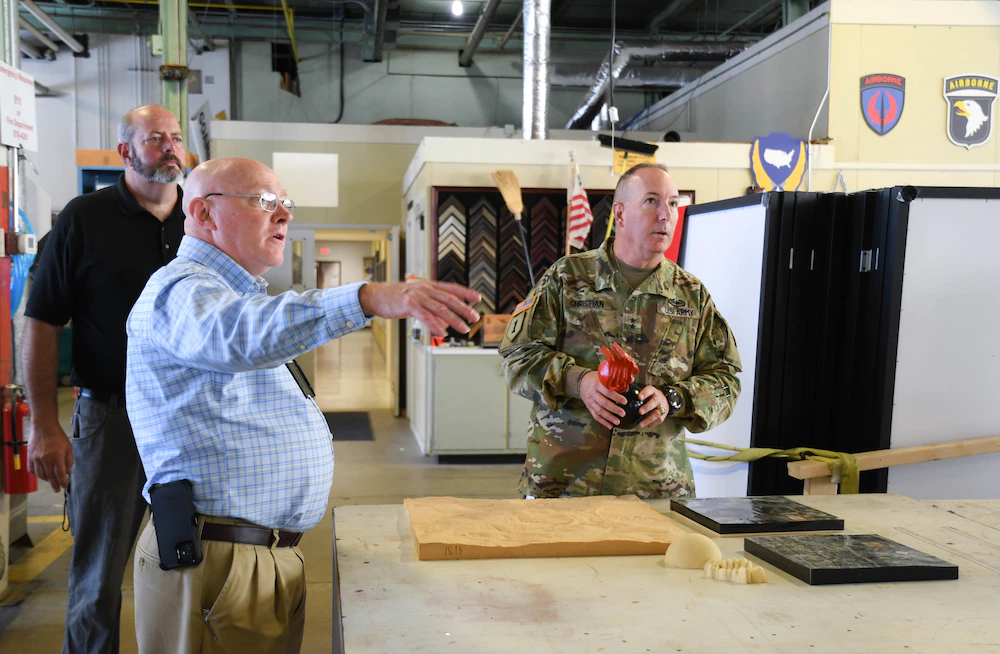 FORT EUSTIS, Va. – For the Enterprise Multimedia Center, a premiere Visual Information production facility, a creative dream is neither too big nor too small. The EMC brings to life creative visions and helps meet the communication goals for the Army, Department of Defense and federal agencies.

The EMC’s contributions to the Army are celebrated by leaders like Maj. Gen. Daniel J. Christian, deputy chief of staff, U.S. Army Training and Doctrine Command, who recently recognized them for their support on the 2021 Remember the Fallen event on behalf of the TRADOC commanding general.

“The team at the EMC provides an invaluable service to TRADOC; really the Army at large. More importantly, they do so with a passion, veracity, and professionalism that shows in every product or project they touch,” Christian said.

During the fiscal years of 2020 and 2021, the EMC’s work included more than $8 million in VI efforts. For TRADOC specifically, the center completed more than 130 videos, and other promotional items such as graphics, banners and information management services.

For EMC producer-director, Bryan Myhr, the general’s visit was a highlight for all the work done by the team.

“It was great to see Gen. Christian come out and recognize the people here because they definitely deserve it. They bring a high level of professionalism to the work they do,” Myhr said. “To see them get recognition from outside of this organization was very exciting to see.”

From creating training videos and film, photo documentation of military events and missions, audio and video playback system support or building products from the ground up such as terrain models and large-format command boards, the EMC is ready to create the Army’s visions.

“The awesome thing about the EMC is the level of quality that we bring to the table,” Myhr said. “Every type of VI product that we make here is at the highest level. Our videos are Hollywood type. They’re not like Hollywood, they are Hollywood type.”

“We are stood up by the Army, we are Army asset. Our primary mission is to serve the warfighter to make sure they have all the visual information products and services they need to accomplish their mission,” Myhr said.

The EMC also oversees operations for the Jacobs Conference Center here, which is a multi-million dollar upgraded facility used for conferences, ceremonies and meetings of any type. It is able support over 600 attendees and video teleconferencing capabilities, including those of a classified nature.

By fully understanding and conveying the strategic visions of the Army and sister service activities, the EMC provides quality communication media and services in order to enlist, empower and educate the warfighter.

For more information about the EMC and their work, visit: https://emc.army.mil