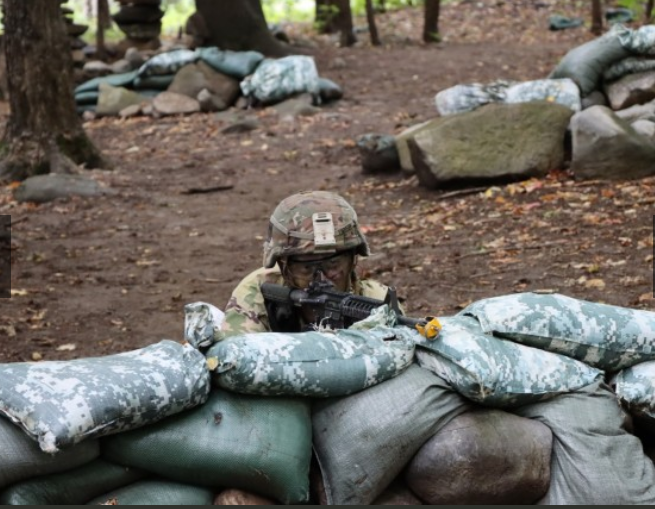 Fort Eustis, VA — The Army always strives to have the most up-to-date equipment, systems, and trainings. The Expert Infantryman Badge, Expert Soldier Badge, and the Expert Field Medic Badge, also known as E3B, received an upgrade from the U.S. Army Training and Doctrine Command, who recently analyzed the current badges, and developed them into an aligned event that can be conducted simultaneously.

Aligning three of the Army’s top Soldier skills test will help reduce the resources, time, and personal needed to accomplish the badge events.

The first of the three badges, created in 1944, the EIB, to recognize Infantrymen who have demonstrated a mastery of critical tasks. These tasks are based on the foundation of the Soldiers proficiency in allowing them to locate, close in on, and destroy the enemy.

The second badge is the EFMB, established in 1965, a special skill award to recognize exceptional competence and outstanding performance by field medical personal.

The ESB is the newest badge, created in 2019, designed to improve Soldier lethality, as well as individual, unit, and overall Army readiness. It was developed to recognize those who have met a high standard of performance in physical fitness and warfighting tasks.

TRADOC and the Test Control Officers created a working group to conduct the initial analysis to start aligning the events.

Due to the “EFMB testing being different compared to the EIB and ESB, there was more that had to change for them to properly align. For example, the EIB and ESB tested on individual skills, whereas the EFMB followed more of a storyline type testing,” said Command Sgt. Maj. Clark Charpentier, Medical Center of Excellence, Fort Sam Huston, Texas.

Based on the team’s findings, new wording recommendations were given to establish more consistency in the administrative process for the three manuals and an overall more cohesive, effective event.

After the initial pilot testing at Fort Drum, changes were implemented to allow more Soldiers to participate in the new testing process to earn badges.

“We originally saw only a 2 to 3 percent increase of those awarded, but as we continue to run the event the percent of Soldiers awarded has increased,” said Command Sgt. Maj. Mario Terenas, 10th Mountain Division.

Regardless of a Soldiers MOS, “they will be able to participate in at least one of the newly aligned badge events,” TRADOC Command Sgt. Maj. Daniel Hendrex said.

“We want to ensure our Soldiers have access to the best available Army training in the world and allow them to be able to earn rewards for proving their excellence in training,” he said.

With the new events being conducted simultaneously “it provides multiple opportunities for the badge events to happen at all Army installations each year, it gives deployed Soldiers, Soldiers who are injured or sick, and Soldiers who have not passed previously to train and test again.” said Command Sgt. Maj. Derrick Garner, Maneuver Center of Excellence, Fort Benning, Georgia.

The legacy model, which has had limited changes over the years, was 45 days long event that used up precious time, a tremendous amount of resources, and people. Due to its needs, the event would only take place once a year to every couple of years. Also each badge event was conducted individually, therefore during the year only one of the three badges would have the chance to be awarded.

Through the implementation of this strategy, TRADOC has successfully addressed the challenges posed by conducting the legacy badge events. Unit leaders in all installations and operation environments will have the resources and solutions they need to available for their teams. Looking forward, the TRADOC team has the intent to complete the new policy by 31 October or earlier and will release it at AUSA under the new Non-Commissioned Officers Strategy.