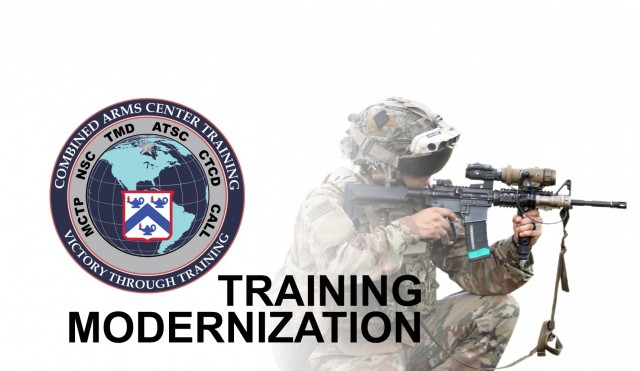 Brig. Gen. Charles Lombardo, Deputy Commanding General of the Combined Arms Center-Training (CAC-T), will be discussing training modernization during a Warriors Corner presentation at the Association of the United States Army’s Annual Meeting and Exposition Oct. 11-13, 2021 in Washington, DC.

Lombardo’s presentation “Training Modernization: Empowering the Army of 2028 and Beyond” is at 1 p.m. eastern, Oct. 11. The presentation is scheduled to be livestreamed on DVIDS at https://www.dvidshub.net/feature/AUSA2021 as well as the CAC-T Facebook page, www.facebok.com/usacactraining.

In addition to the Warriors Corner on Oct. 11, CAC-T will also have an informational kiosk on FM 7-0 and the Digital Job Book and Small Unit Leader Tool. The Kiosk will be available all three days of the event as part of the U.S. Army exhibit in booth 1825.

At the end of March, the Army released an information paper on multi-domain transformation called “Army Multi-Domain Transformation: Ready to Win in Competition and Conflict,”

The paper outlined how and why the Army plans to transform into a multi-domain capable force able to dominate adversaries in sustained large-scale combat operations by 2035.

Chief of Staff of the Army General James McConville said that “the Army is boldly transforming to provide the Joint Force with the speed, range and convergence of cutting-edge technologies that will be needed to provide future decision dominance and overmatch for great power competition.”

According to the Army Modernization Strategy, the primary goal is “a modernized Army capable of conducting Multi-Domain Operations or MDO as part of an integrated Joint Force in a single theater by 2028, and ready to conduct MDO across an array of scenarios in multiple theaters by 2035.” The MDO concept describes how the Army will support the Joint Force in the integration of all domains of warfare – land, sea, air, space and cyberspace.”

CAC-T is an integral part of the modernization that is being driven by the move to MDO.

The Army’s Field Manual 7-0, Training, was released in June of this year. The updated FM provides the foundational procedures leaders use to train Soldiers and units. One of the updates in the FM is the simplification of the doctrine by the reintroduction of the “Training Management Cycle.”

Another update to the doctrine is the addition of “Fight to Train” as a training principle to reinforce making training a priority.

Two of the Training Management tools that Lombardo and Conn will discuss include the Digital Job Book and Small Unit Leader Tool – both accessible via a username/password on the Army Training Network as of 2020.

The Army Training Information Systems (ATIS) is another tool that will be discussed during the presentation. ATIS serves as the future of Army Training Management by providing a common operating picture that is connected to the enterprise, updated by a single data entry system and can generate automated reports

Lombardo and Conn will discuss training modernization, maintaining legacy capabilities while developing and fielding new simulators and simulations to support MDO training at both home station and the combat training centers.

One part of modernization within training exercises includes building interoperability with allies and partners. Lombardo and Conn will also cover other modernization initiatives geared to support MDO capabilities.