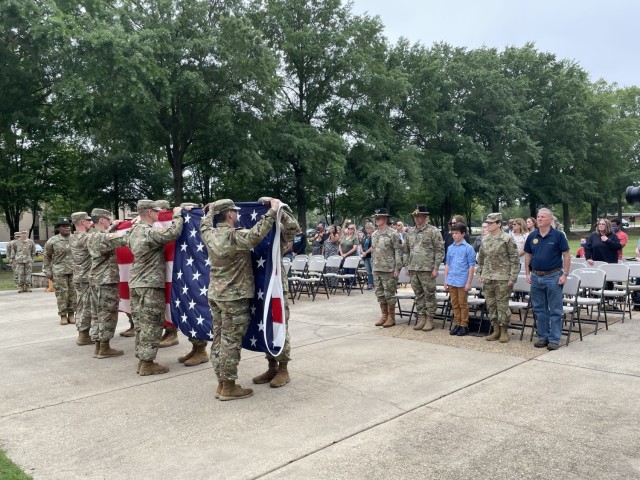 JOINT BASE LANGLEY-EUSTIS, Va. – From May 16 to May 26, Joint Base Langley-Eustis hosted their Memorial Day commemoration event, known as “Remember the Fallen.” This two-week series of events, which included sports competitions, a golf tournament, and a concert in honor of fallen heroes, was organized by Fort Eustis and the U.S. Army Training and Doctrine Command.

The commemoration events served as a chance to foster friendly competition and promote the health and holistic fitness of our Soldiers while also displaying Soldier readiness during such an important and reflective time for military.

The Commander’s Cup, an intramural sports tournament, was the first major event to kick off the remembrance event, beginning with sand volleyball, basketball, and softball competitions.

“Teamwork is a big part of the game, and it plays a big part in the military, too. We [the players] wanted to come together to achieve something bigger than just ourselves to show our support for this important event,” stated Justin Costilla, Commander’s Cup basketball competitor.

The second week of the Commander’s Cup continued with the Military Battle Challenge, a timed obstacle course designed to simulate realistic tactical battlefield skills, and the MURPH, an individual-based workout challenge created in honor of late Navy Lt. Michael P. Murphy who was awarded the Medal of Honor for his actions in the War of Afghanistan.

These two challenges tested Soldiers’ tactical battlefield skills, fostered a winning mindset, and showed that Soldiers are always ready to defend the nation and its people at any given moment.

The annual golf scramble was held May 26 at the Pines Golf Course, where golfers gathered for a casual round to build camaraderie and remember the brave service members who made the ultimate sacrifice for the country.

“We’re here this week to remember our fallen brothers and sisters in arms, and to remember that freedom is not free—that it comes at a great price,” said Gen. Paul E. Funk II, commanding general, TRADOC, during opening remarks. “As we move into Memorial Day, we want to remind everyone this is about freedom, selfless sacrifice, and opportunity in our great nation.”

Also in attendance were professional golfers Kris Tschetter, Marissa Steen, and Greg McLaughlin, chief executive officer of the PGA Tour First Tee Foundation and the World Golf Foundation. The guests thanked the attendees for their service and expressed their gratitude for the sacrifices made by service members for their freedom.

The day continued with TRADOC leadership attending the special Retreat of Colors ceremony by Soldiers from 128th Aviation Brigade. The ceremony was held at Seay Plaza for local Gold Star families who brought photos of their loved ones and wore shirts with their fallen Soldier’s name and photo on them.

The eventful week of remembrance concluded with a patriotic musical performance by the TRADOC Band and Gary Sinise with the Lt. Dan Band. TRADOC leadership, Gold Star families, Soldiers and their loved ones, and Army civilians gathered to see the renowned actor and singer Gary Sinise in person, enjoying great music and company as they prepared for Memorial Day weekend.

Funk reminded everyone in attendance to take time over the weekend to express gratitude and reflect on the selfless sacrifices our heroes made for the country’s freedom.